A robot in a nursing home, to do what ? 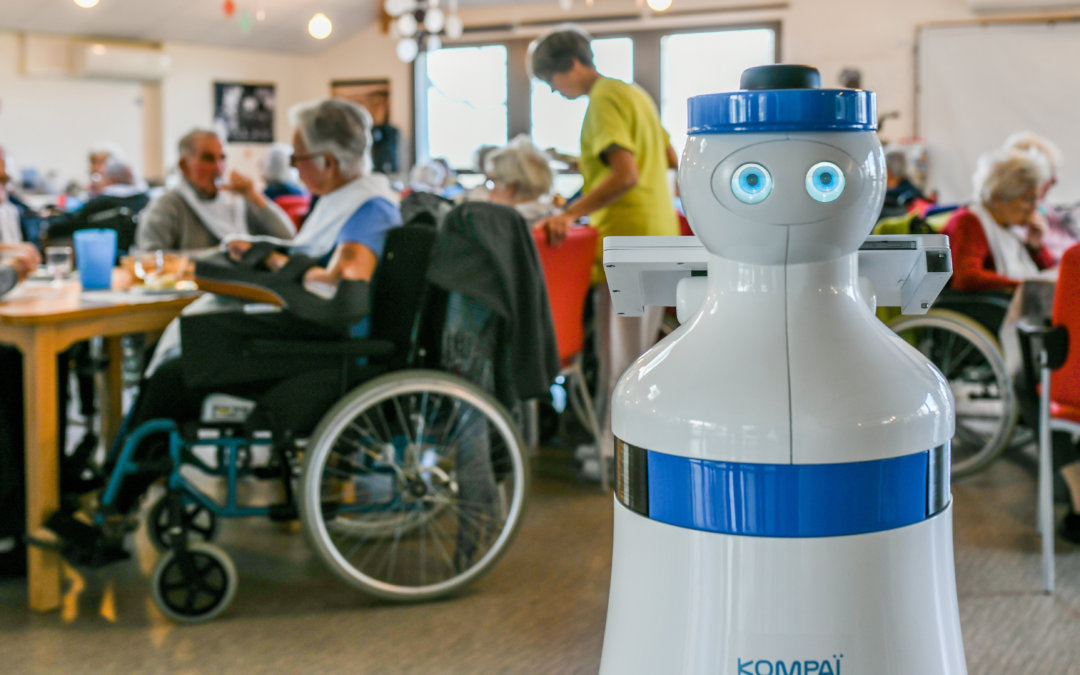 We have been talking for many years about the help that robots could provide in nursing homes.

To illustrate what a robot does in a nursing home, here is the daily schedule which will be gradually implemented for the KOMPAÏ robot from the ADARPEA retirement home in Arcangues.

– 2 pm-4pm: Walk Workshop, alternating with individual and / or collective entertainment

– 4 pm-6pm: Exit door monitoring in the absence of personnel

– 3 times in the night: Surveillance round

His day begins at 10 a.m. with an animation of the waiting area: several residents are seated in the room, and the robot moves from one group to another by displaying slideshows or videos on its screen. This content can be adapted to the context, such as the Basque songs in Arcangues. This animation, intended to stimulate the residents, lasts approximately 1 to 2 hours.

The walking workshop uses the patented mobility assistance system of the Kompaï robot. With the help of the nursing staff, residents with very great physical difficulties can take a few steps, both to distract themselves but also to do some physical exercise.

This workshop takes place alternately with afternoon distractions, which can be individual or collective, that is to say that the robot is used by a single person or in a group. Many games are available.

Every afternoon, during staff turnover, Kompaï is placed at the main door. Thanks to its facial recognition software, it scans people who go out and can thus warn the guard if an unauthorized resident tries to leave the establishment.

In the evening, many residents are anxious before going to bed, and more particularly in the Alzheimer’s sections. KOMPAÏ can thus wander in the corridors and play soft and soothing music.

Finally, during the night, Kompaï makes several tours in the common parts of the establishment and generates an alarm for the guard on duty in the event of an abnormal situation if it is fitted with suitable sensors (fall of a resident, escape of a resident, room temperature too high…). Thanks to his smartphone or tablet, the person on duty was able to raise doubts remotely, and intervene if necessary.

All of these actions represent 6 to 8 hours of daily work for the robot, and this 365 days a year.

The tasks performed by the robot are essentially repetitive and of low added value. It thus frees up time for nursing staff to devote more time to contacting residents.